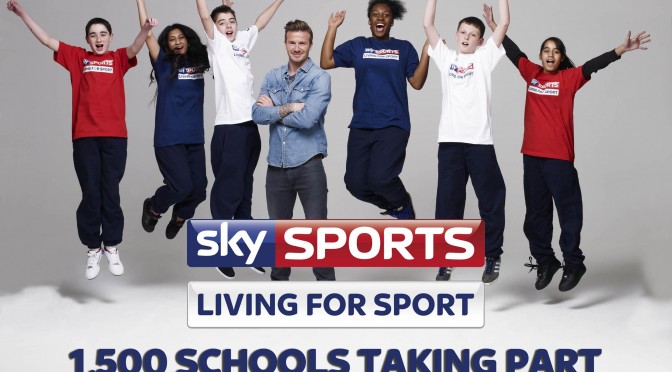 The Dundalk students from Ó Fiaich College were presented with their award by the cast of Soccer AM and QPR striker Charlie Austin, and you can watch the moment they were surprised in the video below. Having noticed an increase in behavioural problems and students lacking motivation and self-belief within school, O’Fiaich College set up their Sky Sports Living for Sport project to encourage goal-setting and raise motivation levels.

During a two week period, students were tasked with improving – among other things – their punctuality, work-rate, attitude and respect towards others. It is telling that Mr. O’Malley found the process of selecting only 19 students the hardest part of running this project, and the chosen group ended up exceeding his expectations.

In the opening session, each student set their own goal and outlined how they planned on improving themselves both physically and behaviourally in the coming 10 weeks. Each Wednesday, the group worked on a different sport, with five local sporting bodies – including the GAA and Irish FA – coming into the school to deliver workshops to the students.

Each member of the group had to report back to their own class to deliver information about the sporting body that had visited the school that week, telling their peers how they can get involved with various clubs outside of school. In doing this, the impact of the Sky Sports Living for Sport project was able to reach school’s entire population.

And the students’ involvement and enthusiasm throughout the whole project was unprecedented compared with any previous extra-curricular activity O’Fiaich College has carried out.

Mr. O’Malley attributed this attitude to the students feeling a sense of belonging to a unique group that was selected due to their improved behaviour, noticing a profound positive impact on them throughout the project. By the end of the 10 weeks, all 19 students had improved their attendance in school and have since steered clear of any kind of misbehaviour. One student whose attendance was only 20% before getting involved with Sky Sports Living for Sport was particularly affected and he did not miss a single day throughout the project.

The Athlete Mentor visits from Dermot Gascoyne and Natalya Coyle also had a huge impact on the students, contributing to a noticeable growth and maturity in their outlook on life. The advice that Dermot offered based on the life skills he has learnt through sport and the importance of hard work, was something the students particularly related to and encompassed everything the project aimed to achieve.

In reaction to receiving the award, Mr. O’Malley said: “It is an amazing honour and it highlights the hard work and effort shown by all involved. This group of students are an amazing bunch of young people and we have had many memorable experiences throughout the project, with this being yet another.”

Chloe Rochford, who was one of the students in the group, said: “It’s been a great experience at Sky Studios and for us to win the Project of the Year award tops off an amazing day. Sky Sports Living for Sport has helped me and 18 other students improve our attendance and helped us to reach our full potential in all aspects of school life. It’s allowed us to become better people and we’re excited that our project has been recognised as the best in the UK & Ireland.”