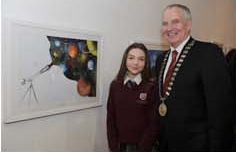 The presentation of awards to the winners of the LMETB Art Competition took place on Thursday evening last, 11th February. Hosted by the Drogheda Arts Centre in Stockwell Street, Drogheda, these awards were to celebrate those chosen as winners and Merit award holders for the first running of this Art Competition. The competition was organised by Deirdre Harrington and Declan Clarke who teach in Scoil Uí Mhuirí, Dunleer, and Paul McCann who teaches in O’Carolan College, Nobber and in Dunshaughlin Community College. Over 11,000 students were eligible to enter, and fifteen of the seventeen ETB schools were represented. The competition was judged by international renowned artist, Robert Ballagh, who was unfortunately unable to attend the awards ceremony. In total twenty entries were selected for awards. Fourteen received Merit awards, seven for both the Junior and Senior categories. Each entry received an Art Pack donated by Cregal Art Supplies, and each was framed by Dealg Art Framers from Ardee.

Speaking at the ceremony, LMETB CEO, Peter Kierans, praised the students and their Art teachers for their achievement which the ETB was delighted to support. Presenting the prizes, the Chairperson of LMETB, Cllr. Oliver Tully, remarked on the exceptional quality of the entries which would not be out of place in a professional gallery. The winners of the Junior and Senior Categories, Caoimhe Kampes from Coláiste Chu Chulainn and Niamh Hughes from Dunshaughlin Community College respectively, each received an iPad and a large Art Pack. Congratulating the winners, Declan Clarke said that the organisers intend to expand the competition when it is re-launched in the autumn.