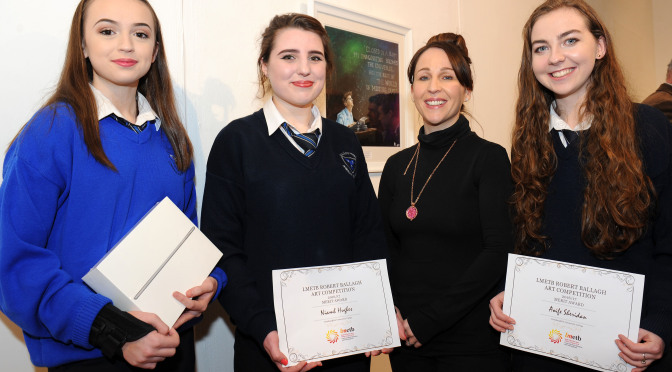 The awards ceremony for this year’s LMETB Robert Ballagh Art Competition took place in March in the Droichéad Arts Centre, Drogheda. Now in its second year, the competition has attracted entries from the ETB’s secondary schools, Youthreach Centres and Further Education Colleges. In total over 12,000 students were eligible to participate and entries were received from over 75% of the Board’s educational instutions. The competition is judged by nationally renowned artist, Robert Ballagh, whose commitment to it was recognised by adding his name to its title. Although unable to attend, Mr. Ballagh recorded a greeting for the prize-winners, praising the exceptionally high standard of their entries.

The prizes were presented by Ms. Fiona Kindlon, LMETB’s Director of Schools and by Principal of Scoil Uí Mhuirí in Dunleer, Ms. Eilis Flood. Ms. Kindlon praised the students for their creativity as well as thanking their parents and art teachers for their encouragement. Ms. Flood acknowledged the exceptional artistic skill on display and suggested to the assembled winners and their families to consider progressing to college to further develop their talent. The Chairperson of LMETB, Ms. Jenny D’Arcy, congratulated the organisers and expressed the hope that the competition would grow from strength to strength.

The competition is organised by teachers Deirdre Harrington, Paul McCann and Declan Clarke. Mr. Clarke thanked Tony Conaghy and Collette Farrell from the Droichéad Arts Centre for hosting the Awards ceremony and exhibiting the entries; Cregal Arts Supplies for sponsoring the Art Packs which were presented as prizes on the night, and Dealg Design for the framing the entries. He urged as many schools as possible to visit the exhibition. The overall winner for each category, namely Junior Secondary School Category Winner Shauna Summerville, Dunshaughlin Community College; Senior Secondary School Winner Chris McConnon, Coláiste na hInse; Further Education Colleges Winner Adrian Federis from Drogheda institute of Further Education; and the winner of the Youthreach Category, Aoife Brown, Youthreach Foundation, Navan, were all presented with iPads.​