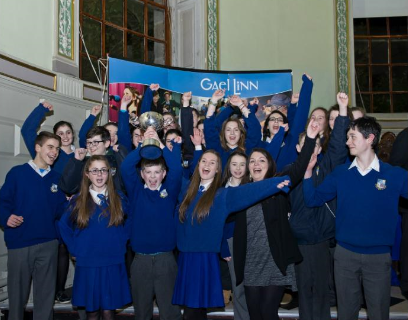 Ireland’s best young debaters ‘as Gaeilge’ are students from Coláiste Pobail Ráth Chairn. The junior debating team from the school has won the All-Ireland Final of Comórtas Uí Chadhain Gael Linn.
This highly regarded annual event took place last week in the Public Theatre, Trinity College, Dublin.  Over 50 teams have taken part in this national competition since last October .
The  Coláiste Pobail Ráth Chairn team, consisting of Diarmuid Ó Curraoin, Zoya Ní Eibhearard and Saoirse Nic Aogáin went head to head in the junior section of the competition against teams from Scoil Chuimsitheach Chiaráin, An Cheathrú Rua, Co Galway, Coláiste Eoin, Dublin, and Pobalscoil Chorca Dhuibhne, Dingle/Daingean Uí Chúis.
They debated the topical motion: “Tá a gcearta á bhfáil ag mná i gcúrsaí spóirt in Éirinn !”  (Women in sport  in Ireland are achieving their rights!). Many interesting arguments were put forward and refuted by each speaker in turn!  There were cheers of delight from their supporters when it was announced that  the Ráth Chairn students were the 2015 All-Ireland Champions – a first for the school in this competition.
They were  presented with the Gael Linn perpetual trophy and a voucher for €1,000.